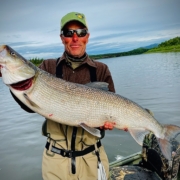 When the word Alaska comes to mind, I’m sure you are immediately thinking about snowcapped mountains, big brown bears catching salmon in the river, bald eagles, and even wales in the ocean. Although these are iconic images of Alaska if you were to look even deeper Alaska has a lot more to offer to the adventurous spirit.

Alaska is the largest state in the union and with that being said has the most to offer for someone wishing to explore. From the far north slope where tundra expands as far as the eye can see to the rainforest in the southeast. Almost everywhere you look it’s something different. I get asked often…. “I want to see Alaska so where do I start”. My answer is always the same and that is… Make a yearly trip for many years because you’ll never see it all in two weeks.

Alaskan Adventures however will be able to share with you what is referred to as Western Alaska Bush Country. We also happen to have a rare find in the world of fishing. This rare find can only be found in five drainages of the north. The Kuskokwim river system is the southernmost system you can find these fish and Alaskan Adventures Lodge is situated on some of the best runs in the state.

The rare find I’m speaking of is known as a Sheefish. What is a Sheefish you ask? Well, they are also called the Tarpon of the North. So that should give you some indication as to what they might look like. To also better describe one, it’s almost as if when the good Lord was making fish, he had a lot of leftover parts from different fish and rolled them together and made this fish we call today a sheefish. Sheefish have the big bucket mouth of a Tarpon, the silver scales of a striper, an adipose fin, and the ability to be anadromous. All in all, they are a unique fish well-deserving of a look at once hooked and released to fight another day.

Alaskan Adventures targets these fish with both fly and conventional tackle. Sheefish are very aggressive eaters and absolutely gorge themselves on salmon fry, baby lamprey, and almost anything ells up to four inches they can get their lips on. The runs we fish in the summer are pretty deep. From 10’-40’ of water is how deep most of the runs are that we target sheefish on. In a lot of cases, they hover at about the 10’ depth mark and wait for bait to come down the river over them and then they shoot to the surface, engulf their prey and continue to the surface where they fly out of the water like Free Willie. It’s actually an awesome sight to see.

Our flies are tied mostly to imitate small salmon fry and baby lamprey. We also fish a floating line with a 10’ section of T-11 or T-14 to really get down in the water column. We typically float a hole and blind cast and strip until we spot a boil. Once a boil is spotted, we cast to it, strip, and hang on. Often sheefish will ignore the boat only to grab a fly right next to it as your pulling your fly out of the water.

If we are gear fishing our favorite offering is Berkley Power Swim Baits fished on a 3/8oz head or 1/2 oz jig head. Often, we will jig right off the bottom as we drift down the run. Keeping our baits just off the bottom right in front of the faces of some of the larger Sheefish. When vertical jigging like this the strike is very light but when the hook is set often the rod doubles over with no give to a 15-20lb sheefish. If we aren’t vertical jigging, we are either blind casting or casting to boils with a nice steady retrieve on the swimbait. Sheefish are usually looking up ready to ambush so hang on.

The fight of a sheefish is really different. Some run to the bottom and try to bulldog it out while a few jump out of the water like a bass or tarpon. Honestly, you never know what you’re going to get with the fight of a sheefish but at the end of the day, they are big, averaging from 10-15lbs and can reach 40-50lbs. Last year’s big fish at the lodge were in the 25lb range.

So yes, In Alaska there is an absolute abundance of things to see and do. If you’re a fisherman Alaskan Adventures will show you some hidden gems of the Alaskan Bush from the comforts of jet boats while staying at a nice lodge and eating some really great meals. Drop us a line for more info!