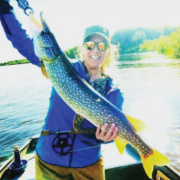 Pike fishing on the Holitna River is some of the best that Alaska has to offer. Or at least I have been told many times by guests. The waters around Alaskan Adventures lodge on the Holitna River consist of a wide variety of environments. From landlocked lakes to oxbow lakes that are connected to the river system to fishing the slack water on the main river. If someone wanted to just pike fish, they could easily fish different water every day and have great success.

Our favorite time of the year to fish for pike is early summer or the month of June. It’s during this time that the water from Spring runoff is on the drop however it is usually still up pretty high. High enough that all of our oxbow lakes are full and have warmer water than the main river. It seems that with the warmer water in the oxbow lakes has encouraged the pike to really put on the feed bag. Maybe the warm water has turned up the metabolism of these fish but whatever it is this is when they get really aggressive. When I say aggressive, I mean they will actually fight each other for feed.

Although we will fish with gear our favorite way to target pike is on the fly especially during the early season. BIG poppers on the fly is by far in my opinion where it’s at. When I say big poppers, I mean 12-16” is just big enough. If you can tie and cast bigger than please do. Big fish like big food!

Often when fishing we like to make a delicate cast as not to spook the fish that might be close by. With pike that is far from the truth. Making a big splash or even slapping the fly onto the water’s surface as hard as you can is as if you are ringing the dinner bell. Often, we have seen big pike laying up under the brush and with a delicate cast, they seem to just ignore it or pay some interest but not quite as much interest as if we were to slap the water hard with the fly. It’s as if when we slap the water hard it really triggers them to come to the fly in a hurry with a fierce aggressive posture. If they don’t grab it on the slap, they usually grab it on the hard strip, and then it’s game on. The best a fisherman can do is to make as much commotion as possible and hang on.

Although steel leaders are a great way to keep fish from biting your fly off, they do have a disadvantage. When a hard-fighting pike decides to do a gator roll the steel wire can wrap around them and cut slices into the fish. We have found using 60lb mono or bigger will help eliminate this as the diameter is larger than wire and mono is softer. Sure, you might lose one or two fish but at the end of the day, there is less damage to the fish that are caught. Generally speaking, all of our pike are released to fight another day.

So, whether you’re a gear fisherman or a fly fisherman we can get you on some really unbelievable topwater action. It truly is amazing to see a 9” plug completely disappear into the jowls of a large predatory fish. Then to bring a 40-50”fish to the boat is a blast that most can only dream of. So, come see what dreams are made of.

Sheefish On the Holitna at Alaskan Adventures Lodge
Scroll to top