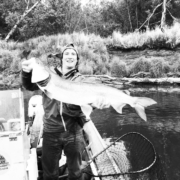 For as long as I can remember sheefish or Inconnu have been a wonder to a lot of anglers looking for something different. I think the wonder is the fact that there is not a lot of places in the world where you can catch sheefish. That topped with there are not a lot of anglers living in places where sheefish do live. It seems they like they live a solitary existence.

Looking at their home water existence they can be found from the Kuskokwim River, North to the Kobuk and in almost every drainage in between. The Yup’ik and Inupiat of Alaska as well as some Athabascan people call these fish “shees” and thus in Alaska the common name is sheefish. However, in other parts of the circumpolar north, this species is commonly called Inconnu (unknown fish) because early explorers, upon seeing this fish for the first time, did not know what they were.

Regardless Sheefish can be found in great numbers around the waters of Alaskan Adventures Lodge on the Holitna river which is a drainage of the Kuskakwim River. Sheefish typically are some of the first fish to make their presence known after ice out. We typically can catch sheefish before any of the Pike turn on. Usually this early in the season we are catching sheefish on spoons or soft plastic swimbaits. It’s rare that real early in the season have we ever seen sheefish break the surface of the water to chase smolt or bait.

By the time mid-June and into July is when we usually really see the big schools breaking the surface as they fly out of the water chasing smolt. It’s not uncommon to see up to two dozen fish flying out of the water at the same time as you look down the run. During June and July, this is really a common practice all over the river system. We typically find the schools of fish when they are rolling and fish them. In the past, we have done really well with small swim baits and flies fished on a heavy sink tip.

Being successful in fishing is a construct of paying attention to what is happening in the water with fish and attempting to replicate that to achieve some sort of success. For example, when a fish is caught it is brought back to the lodge and when cleaning it for dinner, we open the stomach contents to see what it’s been eating and then attempt to replicate that until we have keyed into greater success. In the past one of the things, we have seen a lot of in the stomachs of Sheefish are baby Lamprey. From there we have and continue to perfect the fly imitating a baby lamprey. What we have created over the years has gotten better and better.

On another note, we have often dreamt and talked about catching sheefish on topwater. For those that know what a sheefish is this conversation has often come up around the campfire however it was never attempted… until this year.  When attempting to “figure” a fishery out most your attempts come from deductive reasoning based on what has worked and what hasn’t worked. Most of our deductive reasoning AND minor attempts made us shy away from any attempt at topwater. As guides our job is to put people on fish so often experimenting with new techniques is not usually a standard practice. Hey, we want you to put fish in the boat so basically, we have always done what works well and experimenting is for free time. Free time is rare.

One night after dinner guides Sam and Scott decided to “experiment”. So, they ventured from the lodge looking for rolling fish. Sam had tied some deer hair poppers to try out. It seemed as if the stars aligned, and Scott and Sam were in heaven. What was only dreamt about was happening. Sheefish were clobbering the topwater fly. Absolutely blowing up on it and I don’t mean one or two strikes here and there. I mean fish after fish were blowing up on is and literally destroying the fly. What was a pipe dream was coming to reality.

After that, we started to really target sheefish on topwater with clients and for the first time, I was able to witness complete adults turn into little kids in the candy store. Sheefish on topwater is not an everyday occurrence however in June and July when it does happen it’s truly magical. Adding to this magic are all the other species one can find at the lodge. Alaska is an amazing place filled with endless adventures you truly need to