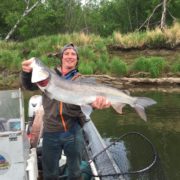 Sheefish, What is it? Also known as “the tarpon of the north”. Sheefish are in the Whitefish family however instead of eating plankton Sheefish aggressively take baitfish. Sheefish spend a good portion of there life in the ocean just like Salmon. Also just like salmon they return to freshwater rivers to spawn. Alaskan Adventures is situated on the banks of the Holitna River and they see great returning runs of Sheefish. Only a few rivers in the north hold these fish and the Holitna is a great place to target then either with a fly or gear.

The average Sheefish caught at the lodge is around 30-35inches. Last years big fish came in at 33lbs. These fish are hard fighting with some displaying aerial acrobatics just like tarpon. Some run deep and bulldog it out but either way, they pull hard and the guides at Alaskan Adventures know exactly where to find em.
Adding to the variety of what not only you can catch at the lodge but also what you can eat. Sheefish are a great eating fish. If you live in the lower 48 probably the closest comparison in taste would be the Walleye. If you like eating Walleye you’re going to love eating Sheefish.
So for a hard fishing fish, you didn’t know existed you need to take a trip to Alaska and visit us at Alaskan Adventures Lodge. We will not only get you on Salmon but you will experience Sheefish as well not only on your line but on your plate at the lodge or on the shores of the Holitna River. 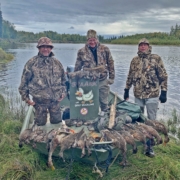 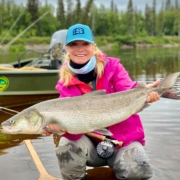 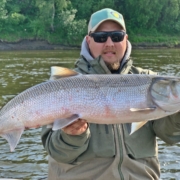 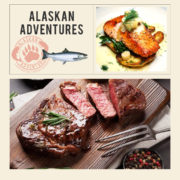 Luscious Lodge Grub
Changing Of The Guard And 2019 Rates